Skip to content
HomeEntertainmentSanjay Dutt reveals why his wife Maanayata and their twins moved to Dubai: ‘Their happiness is above everything else for me’ 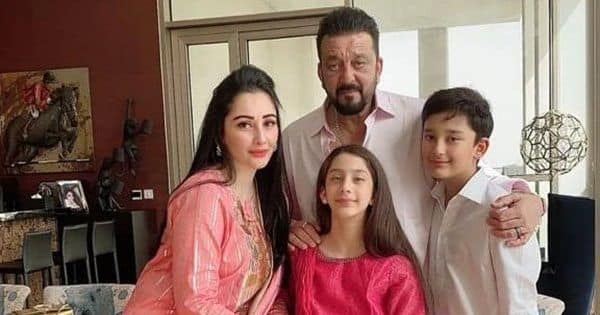 Sanjay Dutt is currently riding high on the mammoth success of Yash starrer KGF Chapter 2, which has crossed Rs 1100 crore mark worldwide. He has also given nod to several projects. He was seen playing a baddie in YRF’s Prithviraj trailer opposite Akshay Kumar who plays the titular role. While Sanjay has been keeping himself busy with work, his wife Maanayata and their twins, son Shahraan and daughter Iqra, have moved to Dubai during the first lockdown in 2020. Though it wasn’t a planned decision to have his family settled there, Sanjay said that their happiness is above everything else. Also Read – Throwback Thursday: Sanjay Dutt reveals how his iconic ’50 tola’ scene from Vaastav was never a part of the script [Exclusive Video]

“They could have absolutely been here, but I see that they love it there. They like their school and their activities. My wife’s business has settled there. Sending them there wasn’t a planned move. It just happened on its own. Maanayata was doing her own business in Dubai, it clicked and she went, and the kids went with her,” Sanjay told TOI and added, “I am happy that my kids are studying there. My wife Maanayata also has her own things to do there. In fact, I spend a lot of time with them in Dubai when I am not engaged with professional commitments here. I fly in and out. I will be with them during their summer break. I will go wherever they are.” Also Read – Ajay Devgn’s Runway 34, Tiger Shroff’s Heropanti 2, Shahid Kapoor’s Jersey and more big Bollywood FLOPS of 2022 [Full list with collections]

When Sanjay was asked if he misses his family while he is in Mumbai, he said, “I came around that when I saw them happy there. My daughter is learning to play the piano, she’s also a good sprinter and is into gymnastics. My son plays for a junior professional football team. Their happiness is above everything else for me.” Also Read – Ranbir Kapoor, Kapil Sharma and 8 more Bollywood celebs who fought drug and alcohol addiction

Sanjay is known for his personal charisma and physique. His ‘never give up’ attitude was seen when he was shooting for the blockbuster Yash-starrer after he had just pushed back cancer. And he nailed the villainous character of Adheera with his stellar performance. Sharing his mantra with his followers, the actor had written, “Nobody cares about your story till you win, so WIN!”

Sanjay has some exciting projects coming up, such as the period drama Shamshera (with Ranbir Kapoor), Ghudchadi (with Raveena Tandon) and Prithiviraj, where he plays the blind uncle of Prithviraj Chauhan, essayed by Akshay Kumar. Apart from these upcoming films, he has signed up for some more interesting projects, which will be officially announced soon.