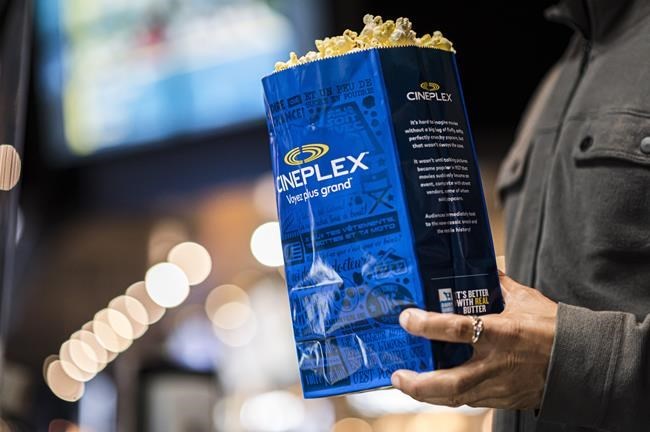 TORONTO — Canadians are returning to cinemas after more than two years of COVID-19 measures, handing a revenue bump to the country’s largest cinema chain.

Cineplex Inc. said Friday that theatregoers’ spending on tickets and snacks boosted its first-quarter revenue to $228.7 million, up from $41.4 million in the first three months of 2021.

“There’s a real desire from our guests to have the whole experience, and what I mean by that is getting that popcorn and drink and going out with their families, and we see that continuing to get better,” said Ellis Jacob, Cineplex’s chief executive, in an interview.

Jacob’s observations come as theatres are plotting a recovery from health measures instituted during the COVID-19 pandemic, which forced cinemas closed for lengthy periods, mandated guests be vaccinated and in some regions, included a ban on eating snacks like popcorn in auditoriums.

For the first time in more than two years, Cineplex’s entire roster of venues is open without restrictions, but the industry is still grappling with how pandemic habits will factor into the future.

The health crisis pushed many studios to release films on streaming platforms, skipping or minimizing their theatrical runs, and even inspired U.S. giant AMC Theatres to start charging more for opening week screenings of “The Batman.”

Jacob said he hasn’t looked too closely at AMC’s model, but his company is facing similar pressures.

Cineplex reported a first-quarter loss of $42.2 million, which amounted to 67 cents per share, compared with a loss of $89.7 million or $1.42 per diluted share a year earlier.

Built into those numbers are $29.1 million in wage and rent subsidies offered by governments during the pandemic, which compared with $11.3 million in the fourth quarter of 2021 and $28.2. million dollars in the first quarter of 2021.

As these subsidies taper off and Cineplex works to recoup losses, Jacob said the business will turn to automation and artificial intelligence to streamline processes and improve workforce management.

Then, it will optimize its properties by converting some excess space at theatres to provide “additional entertainment experiences” that could include gaming and food areas.

“There’s also opportunity to be unlocked by potentially exiting select locations, which are underperforming,” Jacob said, on a call with investors.

Previous testimony from Cineplex, which sued would-be owner Cineworld Group PLC for backing out of a $2.8 billion takeover deal in June 2020, revealed Cineplex has been discussing downsizing and rebuilding the Colossus theatre in Vaughan, Ont.

It is also in discussions around a future condo development RioCan wants to pursue on a parcel of land attached to Cineplex’s Queensway theatre in Etobicoke, Ont.

“One thing we know for sure is the theatre in the Queensway is going to be there, and, what we’re talking about is pretty far out as for what they do there,” Jacob said, in an interview.

Cineplex was awarded $1.24 billion in damages in the takeover suit, but Cineworld is appealing the matter, which Jacob said will return to court in October.

For now, his focus is on ensuring the company continues to make “significant strides” in recovering from the pandemic.

Theatre attendance during Cineplex’s first quarter totalled 6.7 million compared with 415,000 in the same quarter last year, when it faced with pandemic-related closures for a majority of the period.

Many visited to see actor Robert Pattinson star in “The Batman” and Korean pop group’s “BTS Permission to Dance on Stage,” but the real boon was “Spider-Man: No Way Home,” which made up 20.4 per cent of Cineplex’s first-quarter box office.

Jacob believes the company’s numbers will keep improving as a series of buzzy movies — “Top Gun: Maverick,” “Elvis” and “Lightyear” — slated to première this spring and summer hit screens.

Said Jacob of “Top Gun: Maverick,”  “I had the pleasure of seeing this film and can’t recommend it enough.”

This report by The Canadian Press was first published May 13, 2022.

Companies in this story: (TSX:CGX)