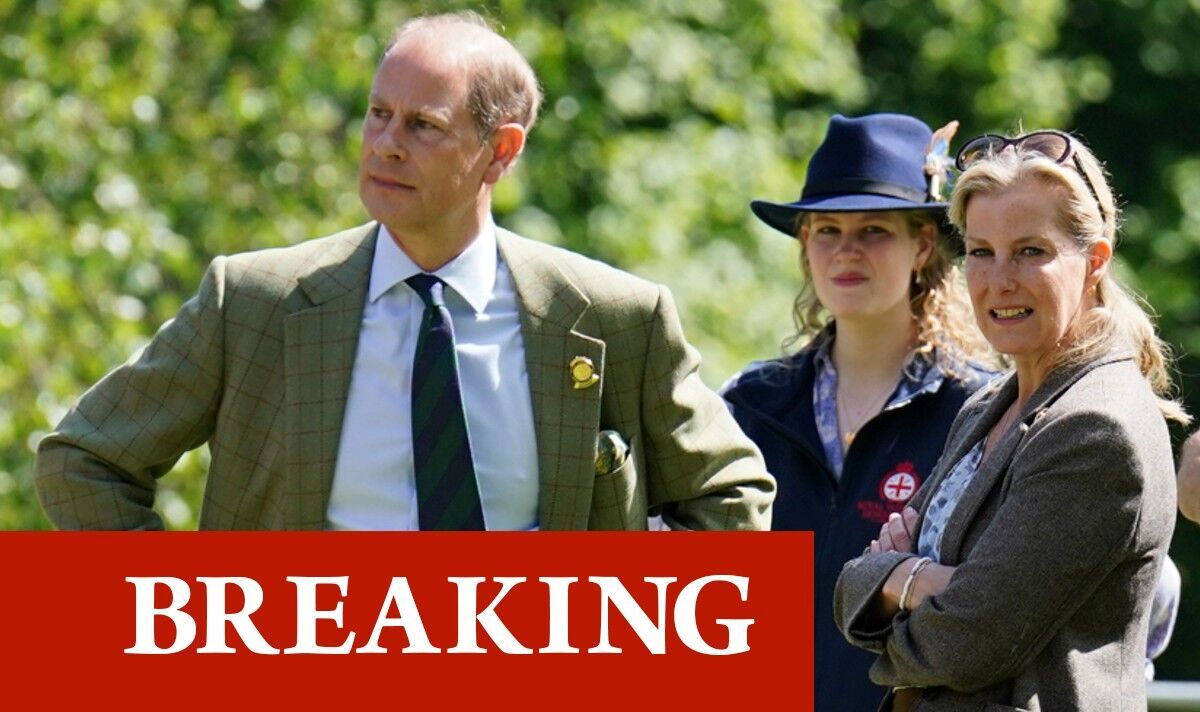 She opted for a neutral makeup look and scooped her hair into a low ponytail for the occasion.

The Countess, who recently returned from a trip to the Channel Islands to mark the Queen’s Jubilee, was seen inspecting a driving obstacle with her family.

Her daughter, Lady Louise, dressed in a blue patterned blouse and pale trousers.

The family’s appearance comes after the Queen attended the show on Friday – her first public appearance since missing the State Opening of Parliament.

Despite ongoing mobility issues, which were the cause of her missing the State Opening of Parliament ceremony, Her Majesty did manage to attend the Woyal Windsor Horse Show herself on Friday.

The Queen arrived in her Range Rover to a warm applause from festival-goers.

She wound down her window to chat with attendees, having not missed the event in the past 79 years.

The festivities were also famously loved by her husband of 73 years, Prince Philip, who died last April at the age of 99.

The Wessexes also attended on Friday alongside the Queen, with Sophie seen taking photographs of her daughter Lady Louise as she drove the Duke of Edinburgh’s carriage and led the Fell Pony Society centenary parade.

Louise lives with her parents, Prince Edward and Sophie Wessex, and her younger brother James, Viscount Severn at Bagshot Park, in Surrey, just miles from Windsor.

Buckingham Palace said the Queen pulled out of her annual Queen’s Speech due to “episodic mobility problems”, with her son Prince Charles standing in her place.

In a statement, Buckingham Palace said the Queen had “reluctantly” decided after “consultation with her doctors” not to attend the State Opening of Parliament on Tuesday.

Since ascending to the throne in 1952 her Majesty has only missed three sessions of parliament, including her absence from this week.

The other two absences were when she was pregnant with Prince Andrew and Prince Edward respectively.

The 96-year-old monarch has missed a number of high-profile events in recent months citing concerns around her health, such as last year’s Remembrance Sunday service at the Cenotaph.

Despite her mobility issues, she was recently able to attend in person a memorial service for her husband, Prince Philip, which was held March 29.

Before the recent statement about her mobility issues, the Queen tested positive for Covid in February, but only had “mild cold-like symptoms”.

Last October she spent a night in hospital after undergoing medical checks, and was forced to miss the Remembrance Sunday service in November with a strained back.

Prince Charles, along with Prince William and other senior royals, are expected to step up in the wake of the Queen’s health issues.

However, there is currently no suggestion that the monarch is handing over all responsibility to her eldest son.