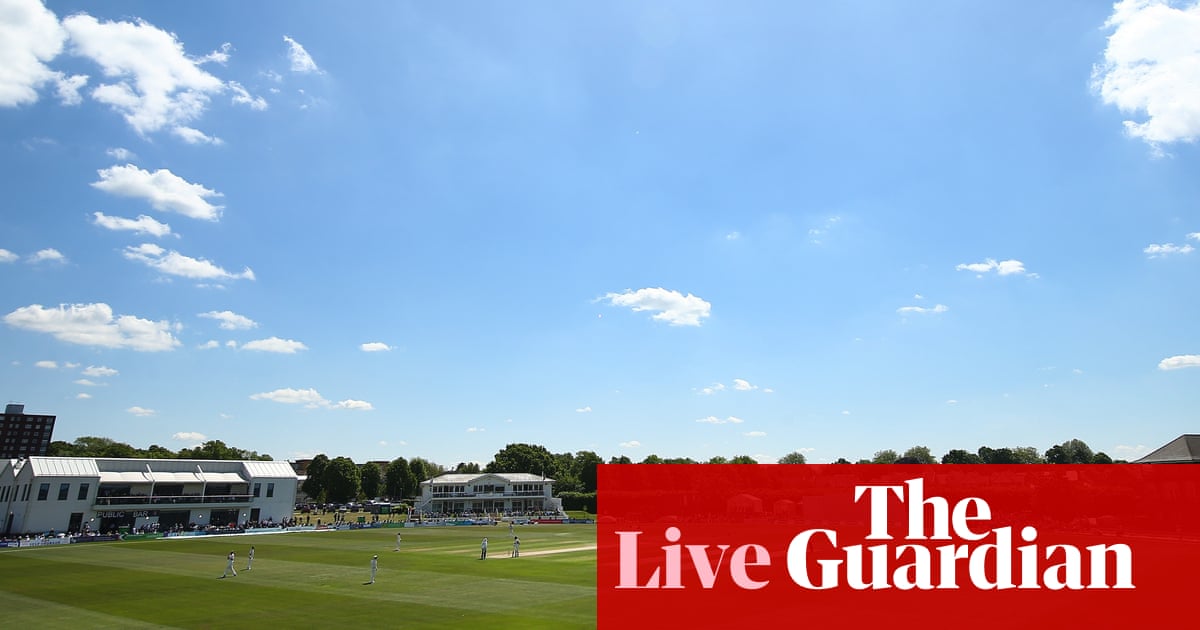 The Derbyshire lower-middle order is wagging in Worcester, a handy partnership between Alex Thomson and Anuj Dal has given them a fifty run lead and counting against Worcs. (I’m NEUTRAL)

Somerset have stuck Gloucs back in to have another go. After skittling them for 186. The cidre lads lead by 400 and some and are well in command at Bristol.

At Headingley, Joe Root has moved serenely to 67* but at 197/5 and a current deficit of 369 runs Yorkshire will need him to bat and bat and bat some more.

Spare a thought for Kent… they’ve just lost Darren Stevens, bowled by Jamie Overton after lunch with sarnies barely digested. They are now six wickets down and trail by a whopping 537 runs. The follow on target of 521 looks a looooooong way away. JOverton is bowling with real venom and Will Jacks looks as if he could get a wicket with every ball, a posse of cream-clad hyenas surrounding the bat.

Men in white coats are starting to appear on my many screens, I’m going to stretch my legs and make a brew, keep an eye on things for me won’t you?

Cheese and pickle sarnie time as I cast my eye around the stream highlights, this has made me chuckle over my cheddar:

Luke Fletcher giving the stattos something to purr over…

There’s fifteen minutes til lunch, I’ll do a sweep of the grounds then. In the meantime, the esteemed Gary Naylor has popped up in my inbox:

“Jim -it’s obvious, just now, that Matt Parkinson spins the ball hardest and Jamie Overton bowls the ball fastest. If neither is picked at Lord’s, it will be a travesty – it’s not like they’re trying to break into a settled, successful team.”

The non-selection of Parkinson has been a particular head-scratcher, I reckon he’ll get a go this summer under the Ben/Brendon axis.

I’ve got eyes on Joe vs Jimmy but also on Beckenham where Jamie Overton is bowling with some real gusto, with ‘gas’ as the kids might say. There’s drama as he clocks Ben Compton on the helmet and the Kent batters’ lid comes clean off and plops onto the stumps. Surrey celebrarte the wicket (and show some cursory concern for Compton) but Compton is given NOT OUT. Something to do with the helmet not being on his person as it broke the stumps which I think is a recent rule change?

As I type this up from a few moments ago, Compton has been snared by Will Jacks for 47, the off spinner has picked up a brace this morning. Kent in strife at 97/4.

James Taylor (not this one) was spotted by Tanya at Headingley yesterday. I’m sure there will be a few keen eyes on young Jacob Bethell too:

Pope plucks a beauty in Beckenham! Daniel Bell-Drummond departs in Jamie Overton’s first over, a thick edge to second slip that the young Pope swoops and scoops off his toes. Kent are two down and the small matter of SIX HUNDRED runs behind. Gulp.

This will be fun!

Wonder if Jimmy might give Joe the odd sledge? “Told you I could still do the business” type of thing…

Hello to everyone below the line, you MUST do as Tanya says and be gentle with me, this is only my second stint stepping into the Aldred brogues/sneakers/stilettos.

I have spotted a question posed from ‘Rooto’ (Joe? Billy?):

“As double tons seem to be all the rage at the moment. Which is your favourite?”

Let’s open this up to all cricket, one of my faves is definitely the Astle blitzkrieg in Christchurch, which is 20 years old now would you believe?

The sun is beating down at every ground that I can see on the live streams. I’m of course COMPLETELY NEUTRAL when it comes to having a preferred side but as a son of the Peak District I am thoroughly enjoying (in a neutral way) Shan Masood racking up the runs for Derbyshire.

He’s surely up there as the signing of the season already?

Have a purr over this:

The clock ticks around to 11…PLAY!

And catch up on yesterday’s happenings thanks to the peerless Tanya here:

Here’s some pre-play reading from Mr B Ronay:

That’s the main story from this round of the County Champo, and indeed the previous rounds too, largely dry weather and true pitches have seen the scoreboard’s up and down the land a’clattering. There have been hundreds, double hundreds and even records tumbling in this round alone, heck there’s even a few batters in with a whiff of a chance of notching up 1000 runs before the end of May, something of a run-scoring grail for the willow wielders.

Jim here on this sunny Saturday, stepping in for Tanya as she has a well deserved day off. I’ll be popping up with updates and interesting tid-bits from around the grounds throughout the day. As ever I’ll be reliant on your eyes and ears so please do keep me company and get in touch below the line, on email or the twitters.