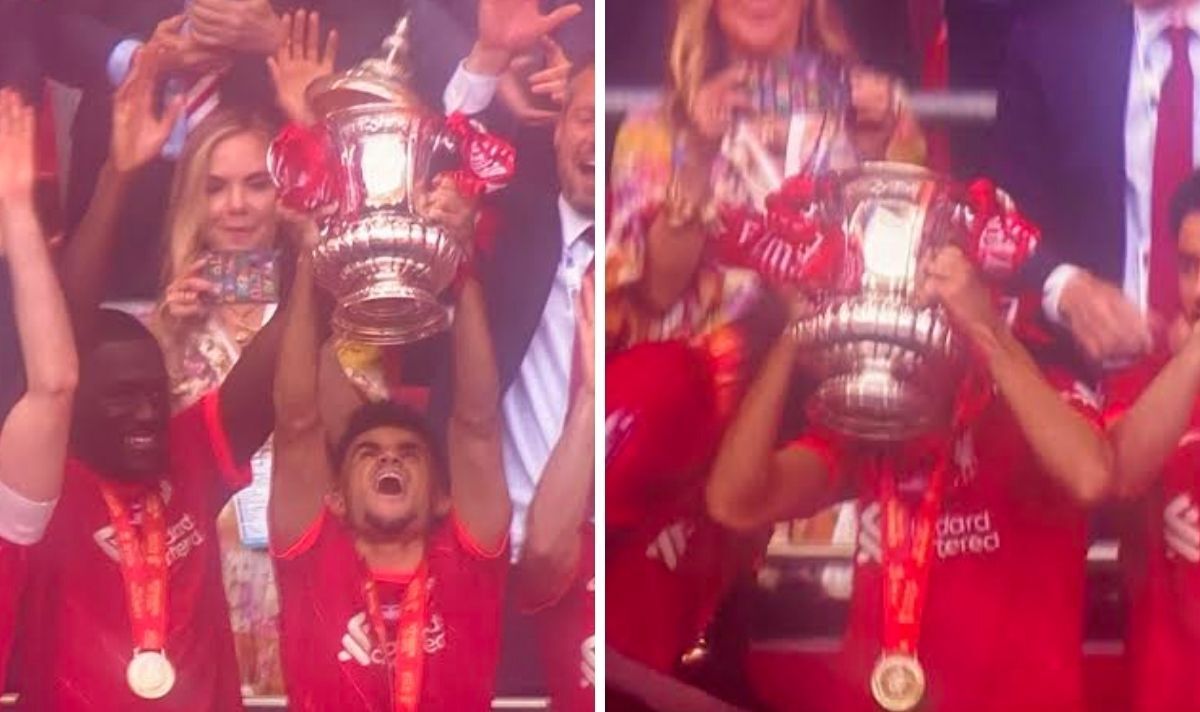 Luis Diaz accidentally sent the FA Cup lid flying backwards during Liverpool’s trophy lift on the Wembley catwalk, despite a firm warning from Trent Alexander-Arnold. The England international right-back spotted the danger after scoring in the Reds’ 6-5 penalty shootout triumph and tried to tap Diaz but it was simply too late for the jubilant Colombian, who had just been passed the trophy.

The £37.5million January recruit from Porto was excellent for the Reds and he was keen to enjoy his moment, lifting the trophy aloft.

But the famous lid, that has been dropped a number of times over the years, took another battering as it flew backwards towards the guests watching on from the Royal Box.

Curtis Jones and Ibrahima Konate watched on before quickly looking around for the missing piece of the trophy.

Joe Gomez’s face was also a picture as the lid toppled through the air.

Jurgen Klopp’s side remain in the hunt for the quadruple, although it’s clear Manchester City are now the Premier League title favourites.

But Liverpool still have a Champions League final against Real Madrid to look forward to in Paris on May 28, as they eye revenge against Los Blancos.

They had to do it the hard way at Wembley on Saturday afternoon after losing both Mohamed Salah and Virgil van Dijk during the contest.

Salah limped off in the first half with a groin injury and is now facing a race against time to be fit for the Champions League final.

Van Dijk was seemingly taken off as a precaution at the beginning of extra-time.

Match-winner Kostas Tsmikas struggled to contain his delight after netting the decisive spot-kick.

“We gave it absolutely everything. Big congratulations to the boys. We have to celebrate hard. But tomorrow is a big day. We have the Premier League and the big final,” he said.

“It’s very, very special for me. The manager asked me what number I want. I say number seven. He asks me why so far? I say I want number seven and it gave me a good opportunity to score. I choose the right side and I score. And I am very happy with that.

“We want to win. Our goal from the start of the season was to go for it, hopefully at the end we are happy.

“We have to celebrate now, but we have big games coming up that we want to win.”